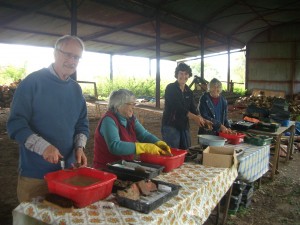 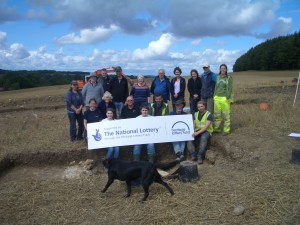 Just some of the digging team with Beth the dog

The biggest surprise today was the find of another building – a little way from the villa but it appears to have waterproof mortar and a void under one section so we are becoming very excited at the prospect of having found a Roman bath house! Tomorrow should make things more certain when we continue digging here.

It was wonderful to see so many people arrive this morning all eager to get started despite the atrocious weather! The day was started by a induction delivered by Duncan Coe about site safety an good practice and a talk given by Tom, both from Cotswold Archaeology, about the types of finds we are likely to encounter during our excavation and the finds processing techniques we need to implement to sort, clean where appropriate, label and store securely.
Whilst this was going ahead the first trenches over the villa were being opened by mechanical digger whilst the remaining trenches were being surveyed and flagged into the grid.
At long last the volunteers, who had been patiently watching as the digger cleared the first trenches were told to gather their gear and assigned the trenches to put their training into practice.
The weather was ‘challenging’ (!) to say the least but good progress was made and some lovely finds uncovered including 3 coins, a small 1st century brooch and a wonderful intact bone pin. A great start indeed.

A second wet day tried but failed to dampen spirits. It was decided to leave the large trench 2 alone to dry out a bit so trenches 4 and 5 were started. Trench 4, being in the middle of the main range may have an entrance, perhaps just coming into view and trench 5 showed a possible ‘dog leg’ in the external wall. As the weather cleared in the afternoon trench 3 was started which was placed over where we had dug in 2013 but only down to topsoil level to expose the tops of walls. This time we are extending the trench and going down deeper to explore amongst other things, whether it mirrors the northwest wing.
A small team worked enormously hard and very successfully in the barn to keep on top of the finds that were being generated.
The digger completed opening all the trenches with many really exciting prospects. Watch this space!

This large Roman site includes a huge villa – the main range 50 meters long with two wings each 20 meters long. The site also includes either ditches and trackways and possibly other buildings hence the need to investigate the site. 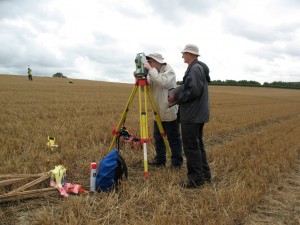 Steve and Tony with the “total station” used to survey the site.

On 24th we had a wet day of setting out as many trenches as possible in the rain. This continued on Tuesday with a dash to finish setting out the trenches before the digger came in to take off the topsoil. 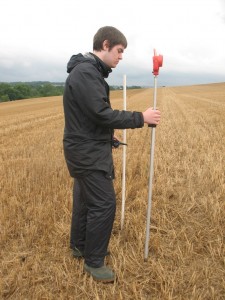 Oliver with the prism used to read off accurate location spots 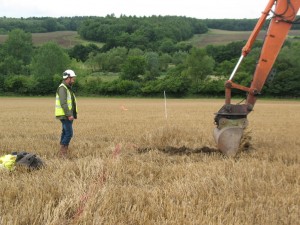 Removing topsoil from the trenches – the easy way!

It remained dry in the morning but as the trenches were ready for volunteers to dig, the rain came down which made it really difficult to work. But everyone carried on undaunted. One of the most amazing finds of the day was a  delicate bone pin found undamaged under masonry and mud! 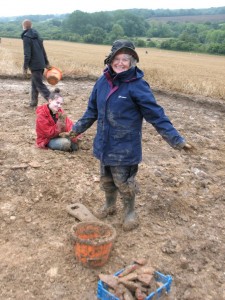 Janet – digging one of the villa wings 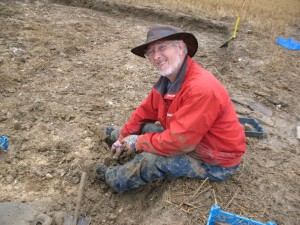 Andrew having a well deserved moment of rest 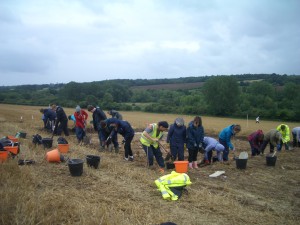 Volunteers at work on the largest of the trenches 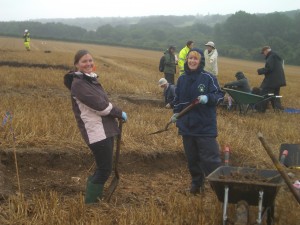 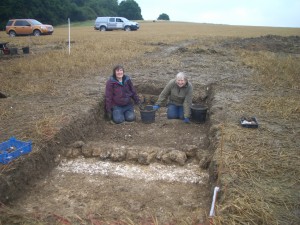 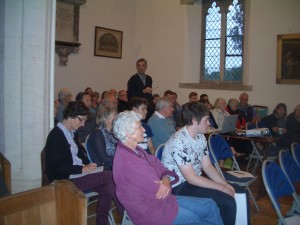 Boxford History Project has received £62,700 from the Heritage Lottery Fund (HLF) for Revealing Boxford’s Ancient Heritage: a community archaeology project. This three-year project under professional archaeological guidance will investigate three closely linked Roman sites near to Boxford village in West Berkshire. Previous work at these sites suggested Roman occupation in an area where little is known about the extent of early settlement.

In the past, our community archaeology has successfully drawn together people from a wide age-range and all walks of life. This time our volunteers will receive specialist training, with lectures and fieldwork, giving them the skills to interpret their local heritage, and identify, record and protect these sites. Any finds will be displayed at the newly built Heritage Centre in Boxford.

Over the past three years, Boxford History Project (BHP) has been helped by the Berkshire Archaeology Research Group (BARG) and Cotswold Archaeology (CA) to undertake preliminary geophysical surveys of all three potential sites and identified varied building outlines, predominantly from the Roman period. Trial excavations took place on the largest of the sites two years ago with some exciting finds. Thanks to National Lottery players, this grant will enable BHP in a formal partnership with BARG and CA to investigate the function, extent, status, chronology and relationship between the three sites, which seem to represent a significant focus of high-status Roman occupation in the Lambourn Valley, with the Roman Road, Ermin Street nearby.

Commenting on the award, Joy Appleton said: “We are somewhat stunned but absolutely thrilled to have received the support of the Heritage Lottery Fund. We are confident that the project will enthuse locals and a wider audience to take part in the project and gain a greater understanding of what went on here in Boxford 2000 years ago.”

Explaining the importance of the HLF support, the head of Heritage Lottery Fund South East, Stuart McLeod, said: “We are delighted that, thanks to National Lottery players, we are able to support this fascinating project, which will give visitors and the local community a chance to explore and learn about the heritage under their feet”.